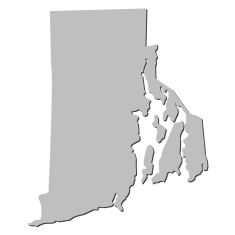 When taxing residents on their income, states have a few options for how they want to assess the taxes: joint, combined, or a mixture of the two. Rhode Island uses a joint filing system, which taxes the incomes of married couples as one unit, a single amount of income, by combining the spouses' income. This is similar to the way the federal government taxes income, and stays in line with the idea that a family is a single economic unit. Rhode Island recognizes same-sex marriages, which taxes these couples the same as opposite-sex couples using a joint system.

The tax base for Rhode Island state income tax is centered around the federal adjusted gross income of the taxpayer. Rhode Island follows the federal law very closely, regarding what income is included in taxation, however there are two major differences to be aware of.

The following forms of income are exempt from inclusion in the tax base:

Rhode Island has a standard deduction based on filing status as follows:

Taxpayers whose modified federal AGI is between $185,550 and $207,590 are subject to a phase-out of the standard deduction. In addition, there are other deductions that taxpayers can take at the state level to save money: