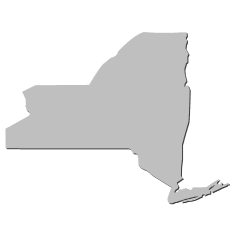 Under a joint filing system, residents of New York who file with their spouse can add together their separate incomes to create a single taxable amount. This is the most common method used by states, and extends the federal concept of taxing a family as one group.

Same-sex married couples are subject to the same rules as opposite-sex couples, since the marriages are legally recognized in New York. This means that these couples are taxed exactly the same.

The tax base for New York begins with the federal adjusted gross income, and some major differences begin to emerge in comparison of the state law to the federal.

Some exclusions for certain sources of income exist at the state level, differing from the federal law. These exemptions are as follows:

The standard deduction for state residents is $7,700 single/married filing single, $15,400 for married filing jointly, and $10,800 for Head of Household. Other deductions include:

State, local and foreign income taxes, as well as federal are non-deductible. College tuition is only deductible if the taxpayer hasn't claimed the college tuition credit. Total deductions are subject to income limitations as per the state thresholds.

* New York City collects its own income taxes in addition to those collected by the state. The city's tax rates range from 2.9% of taxable income to 3.88% for top earners.