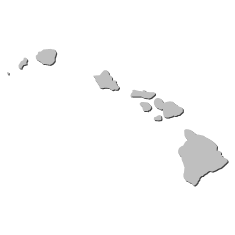 There are three different individual tax systems used to tax residents' incomes on a state level: joint, combined, and a combination of the first two. Hawaii choses to use a joint system, which means that married couples combine both of their incomes into a single amount subject to taxation. The federal government uses a similar process for joint filers. Hawaii recognizes same-sex married couples and those in a civil union, and taxes them the same as opposite-sex couples.

Tax base is structured with the federal guidelines as a model, using federal adjusted gross income. While Hawaii uses the federal system as a guide, the state laws have a few notable differences.

Certain income is exempt from inclusion in the tax base for Hawaii state taxes:

Hawaii also taxes some income that is generally exempt by the federal government, such as certain student loan interest and adoption benefits provided by employers.

Hawaii also offers deductions that can help taxpayers save some money when they file their taxes. The standard deduction in state is as follows:

There are limits on deductions based on certain AGI thresholds. State and local taxes can't be deducted by taxpayers with an AGI of:

Itemized deductions are also limited by AGI thresholds. Certain deductions at the federal level, such as education expenses are also taxed in Hawaii.