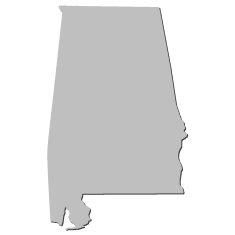 States adopt different types of filing systems for their individual state income tax. There are three different types: joint, combined, or a combination of the two. Alabama uses a joint filing system, in which both spouses' incomes are added together and taxed as one amount, similar to the federal tax concept of taxing families as a single economic group.

Alabama uses the federal adjusted gross income as the base for figuring out the state tax, though variances occur when determining what income is subjected to tax and what which deductions are available.

Certain income is exempt from being taxed by Alabama, which is different than the federal guidelines. These include:

Other Differences From Federal Law

Interest earned on State or Municipal Bonds is taxable, with the exception of Alabama obligations. Capital gains and losses follow a similar structure to the federal law, though losses are deductible and gains taxable in the year in which they were incurred.

Exclusions exist for Up to $25,000 in severance pay as a result of administrative downsizing, as well as any income from the Department of Defense for a relative killed in action in a combat area, along with that military member's spouse's income during the year of death.

The standard deduction for Alabama is based on a sliding scale, set at income over $30,000 per filer as follows:

State income tax and local sales tax is non-deductible, however FICA, federal self-employment tax and railroad retirement is deductible. Additionally, Medical expenses must exceed 4% of the resident's AGI with the exception of long-term care premiums, which are 100% deductible. Employees who relocate to Alabama for a job can deduct 100% of moving expenses as well.